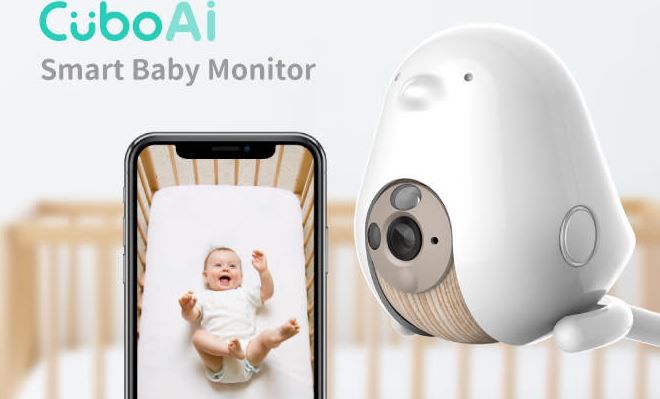 8shares
We are mom-supported. When you buy through links on our site, we may earn a commission

Cubo AI baby monitor was released was just made available for purchase on Amazon in November 2019. For about $300, you can get yourself this smart baby monitor that uses artificial intelligence to give you data of your baby and the environment.

During the test period, 86% of the trial users gave it an excellent 5-star rating and it got us interested to review it here at 10BabyGear.

We categorize Cubo AI among other wifi baby monitors and classified among smart baby monitors that use computer vision and sensor fusion such as Miku baby monitor and Nanit Plus.

Several media outlets such as Engadget, Digital Trends, Tom’s Guide and Yahoo Finance have done a feature on Cubo Ai camera and we thought we could combine all info available and give you all you need to know about this AI camera.

Parents and baby monitor experts have termed Cubo AI as the most intelligent camera that offers protection for your baby. The Cubo camera is developed and distributed by a Taiwanese incorporated company called Yun Yun AI Baby Camera Ltd. The company was founded by Joanna Lin, a mother of a 3-year-old son and Dr. Kenneth Yeh, an experienced pediatrician who has supported care for over 10,000 newborns in a span of over 15 years.

The camera and app were available for sale in markets such as Australia and the US since January 2019. The product has gone through testing and is now available for shipping at $199 at Indiegogo website. Once the Cubo AI camera sells out its entire 68 units remaining, the price will shoot up to $299, a $100 extra. You should note that shippings orders for July will be shipped by September so you should plan around when you plan to get it.

When you purchase Cubo AI Camera, you get a 30-month guarantee, a free cancellation before shipment and guaranteed shipping within a month.

The Cubo camera was designed by AI and medical experts including Dr. Yeh Cheng-Hsiung, a renowned pediatrician who Cubo AI has been regarded as the smartest camera because of it the following features that you wouldn’t find in any traditional baby monitor. Below are the unique features of this AI camera:

The photo below has all the specifications of the Cubo AI camera:

You can also check out its manual here.

Below is a picture of the Cubo AI camera, the world’s smartest camera:

The Cubo AI camera and App was released in Q2 of 2019 but you can still qualify for an early-bird purchase discount of up to 66% and join over 2,000 parents that have got their hands on the Cubo AI camera.

Where to get it – Australia, US, UK, Europe, and the Entire World

You can get Cubo AI in Australia, US, UK and in the US. Unfortunately, Cubo AI is currently not available on Amazon and can only be obtained from the Indiegogo website.

Cubo AI, the camera we’ve all been waiting for since the Indiegogo fundraiser was launched is now available for free on Android and iOS devices.

Cubo AI got its funding by crowdsourcing from Indiegogo website. They managed to raise $472,934 from over 2,500 backers as of July 24, 2019. This is over 900% of what they initially planned to raise. You can read more of their Indiegogo fundraiser here.

How Cubo AI Is Different:

Pros
1. Barely any lag in the transmission of camera feed to your smartphone
2. You get notified when your baby cries, rolls over or has the face covered.
3. Its design is great for the nursery – it has the shape of a bird.
4. The 1080p HD video quality is great in day and night vision modes. It is so clear in the night vision that you can see your son breathing when you view the feed.
5. Cubo tells you who is viewing the feed – There is a round button on the side of the camera that will light up around the edges with different colors to easily tell what is happening. A dark blue light lets you know if someone is viewing the feed. No other camera does this.
6. It does not have monthly storage fees – Cubo gives you access to the past 18 hours of videos and saves video clips
7. It comes with three different mounting options: floor stand, crib mount, and mobile stand. The mobile stand allows you to move it around the house.
8. It provides temperature and humidity sensors to assist me to know if I need to adjust my A/C.

Cons
1. It is relatively expensive, costing more than $200
2. It does not monitor breath and does not give you your baby’s breathing rate per minute
3. The build quality of the camera itself isn’t the best. I guess not all companies can reach the “Apple-standard” in the product design and make. The software of Cubo is a great though and that makes up for this downside.
4. Some users have reported the connection to the camera to be a bit unstable. I’ve listed the troubleshooting steps that the companies provided in this FAQ section below (https://10babygear.com/cubo-ai-smart-baby-camera-review/#Cubo_AI_FAQs).

Both Cubo AI and Nanit use artificial intelligence to get data of your baby and your baby’s environment without coming in contact (non-wearable tech). The table below shows the differences between Cubo and Nanit Plus.

Overall, when all the features are considered, Cubo AI has superior AI technology that does not require you to purchase an additional blanket for more accurate readings. Cubo AI costs almost $300 but there are no additional purchases you need to make for equipment such as mounting kit or camera stand.

The table below explores more differences between the two smart baby monitors available in the market in 2020.

How much is Cubo AI?

Cubo ai not connecting to wifi

Cubo AI Not Connecting to Wifi

Below are the steps you can follow to troubleshoot if your Cubo AI baby monitor is not connecting to wifi.
1. Are you using the original plug that came with Cubo?
2. What is the status light on Cubo when you were unable to connect? (https://bit.ly/37Hthrw)
3. Please double check if Cubo has been properly connected to the stand. There should be no gap between Cubo and the stand (example: https://bit.ly/2ZtCjCV). If you are unsure, please take a photo from the side and we’ll be happy to double check for you.
4. Has the WiFi environment changed recently? (i.e. Cubo was moved and connected to a different network)
5. If you’re using the same WiFi network on your phone, please run a quick test next to Cubo using www.speedtest.net and share a screenshot for reference.
6. Please help provide your Cubo account email.