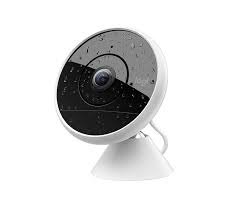 Logi Circle is now compatible with Google Home Hub. The updated version is called the Logitech Circle 2 and was released in 2019. Logitech’s compatibility with smart homes or Google Home Hub means you can set up your Logi circle camera to monitor your baby and stream the video on the Google Home Hub tablet. Logi Circle has been available for sale on Amazon since July 2017 but Google approved it in May 2019 as one of the security cameras that can integrate with Google Home. Logi Circle comes with all you need to get set up with your Home Kit.

Logitech Circle wins in design. It has a stable base which is attached to a long USB cord which allows you to mount it anywhere, the window or even an AC plug on the wall. The USB plug makes it a non-wireless camera-cum baby monitor.

Logi Circle is a wireless security camera that streams in 1080p HD resolution with night vision technology. You are able to see your baby during the day and night. It has 180 degrees viewing angle and is very easy to set it up.

Logi Circle Google Home Baby monitor comes with AES 256-bit dual layer encryption storage that is set up as your own private secure cloud storage. The data is stored in the cloud for free for a period of 24 hours. As any other wifi baby monitor, you can access the video feeds from your phone or computer.

How to Connect Logitech Circle to Google Home Hub

Pros
1. It’s easy to set up and mount anywhere 2. It has a simple app and web portal 3. It can be powered by battery 4. It has a two-way communication option
Cons
1. No way to configure alerts or recordings.
2. Battery doesn’t last long enough for realistic wireless use.

In the video below, Garrett compares Logitech Circle 2 and the Nest camera. Logitech is cheaper than Nest camera. Both cameras almost have the same sizes and circular figure. Logitech Circle has a popular feature called day brief where it sends a summary of all clips that were recorded the whole day. Logitech can be mount on the window or on the electricity outlet/plug. Logitech can be used indoor and outdoor. Nest cam, on the other hand, is 1080p HD resolution camera that is made of metal. Not made of plastic-like Logitech Circle 2. The quality of images is better in the Nest cam – clearer images. Both cameras have motion sensors.

In the video below, Rose compares five smart cameras.