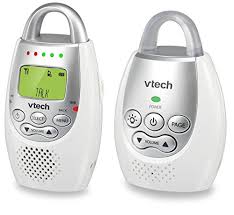 The VTech DM221 emerged as the best sound-only baby monitors of 2020in our review here at 10BabyGear. The VTech DM221 has excellent sound clarity with some of the best and loudest sounds in the group.

VTech DM221 is currently the 3rd best-selling baby monitor as of March 9th, 2020, coming behind other top monitors such as Infant Optics and VTech DM111.

VTech DM221 was one of the earliest baby monitors released by VTech in September 2012. According to Helium10 data, it currently ships an average of 1400 units a month on Amazon. As you can see in the graph below, VTech DM221 has taken lead as the preferred audio baby monitor that has maintained several high-level reviews, 4/5.

This monitor has sound activation and two-way talk to baby, the two most sought after features in monitors. If that isn’t enough to sway you it has a remotely controlled nightlight, belt clip, and mute features. This monitor might be a little more complicated to use thanks to the menu options and programming, but it is a good option for most families looking for good sound clarity and lower price.

VTech DM221 was released in September 2012 while VTech DM223 was released four years later in May 2016. VTech DM221 is pocket-friendly given that it sells for less than $40, which is significantly cheaper than equivalent audio baby monitors by brands such as Philips Avent (see the comparison in the last section of this review). VTech DM223 comes in two color sets, pink and a silver-white option with both having two parent units.

You can buy the VTech DM221 baby monitor on any major retailer such as Amazon, Walmart or Target. If you are outside the US and in the following countries, you can go to the respective Amazon store:

VTech DM221 Canada: In Canada, you can get your VTech DM221 using this Amazon link

VTech DM221 Australia: For those in Australia, you can purchase VTech DM221 using the Amazon Australia or in your local Target store if you live in a city such as Sydney.

VTech DM221 UK: If you live in the UK, you can get this audio baby monitor from Amazon UK site using this link.

Rest of the world: If you live in any other country in the world such as Dubai, you can use the US link here.

From the marketing materials such as those you’ll find on Amazon, VTech DM221-2 has a battery life of up to 18 hours which is considered very long. You should note that the parent unit is powered by batteries or the AC and you’ll be relying on AC entirely to power the baby unit. After using VTech DM221-2 for a period of 3 to 6 months parents have uncovered that the VTech DM221’s battery life is less than 2 hours and have had to depend on the AC to power the parent unit as well. Given that the VTech audio baby monitors are sold at a very low price, you should plan for some disappointment with battery life. You should also read out guide on baby monitor batteries.

If you currently own a VTech DM221, you may have realized that its chargers or VTech DM221 power adapters do not last. This goes back to the problem of opting for cheap baby monitors. You can, however, get a VTech DM221 charger on Amazon here. The T Power VTech charger is compatible with both the baby and the parent unit. It also has a long cord of up to 6.6ft. If you are having any problem with VTech DM221, you should contact VTech customer service. You may need to read our few tips on how to deal with VTech customer service.